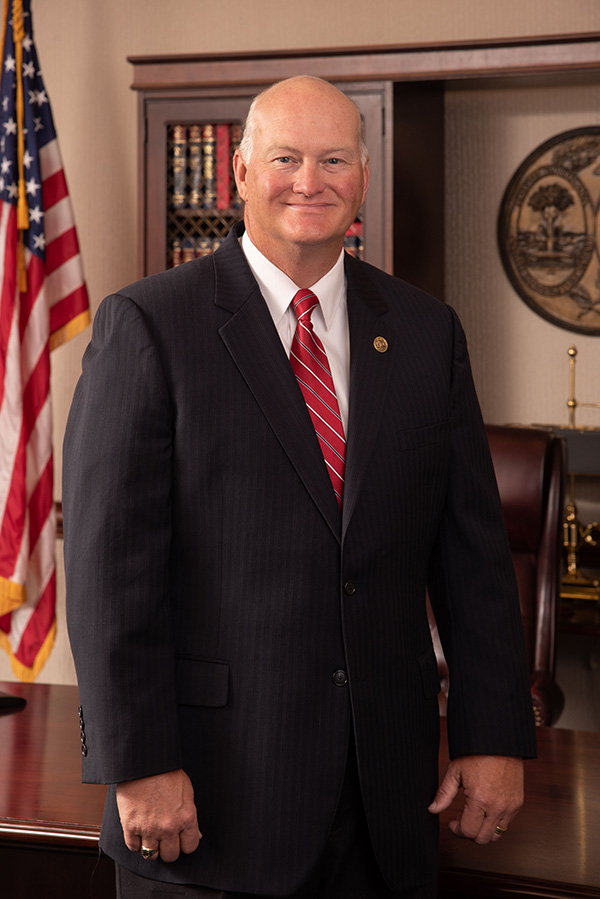 South Carolina Secretary of State Mark Hammond grew up in Spartanburg, where he graduated from Dorman High School. He received a Bachelor of Arts Degree in Political Science from Newberry College in 1986 and went on to obtain a Masters in Education from Clemson University in 1988.

Secretary Hammond completed special basic training at the South Carolina Criminal Justice Academy in 1991 and worked as a Criminal Investigator, aiding prosecutors for the 7th Circuit Solicitor’s Office, until 1996.

Secretary Hammond is dedicated to efficiency, accountability, transparency and customer service. Some of his more notable successes as Secretary of State include:

Secretary Hammond is an ex-officio member of the South Carolina Consumer Affairs Commission and Legislative Council. He has served as the liaison to the Notary Public Administrators (NPA) section of the National Association of Secretaries of State (NASS), where he also chaired, co-chaired or served on the International Relations Committee, the Standing Committee on Business Services, and the Company Formation Task Force. Secretary Hammond was named an Outstanding Alumnus by the South Carolina Shrine Bowl for Public Service in 2006; named a Henry Toll Fellow by the Council of State Governments; a recipient of the Sesquicentennial Medal of Honor Award - Outstanding Alumni by Newberry College in 2007; served as a trustee for Spartanburg Methodist College from 2009 - 2015; was honored with NASS’s Medallion Award in 2017 for his outstanding service and longtime leadership support; and in 2019 he was inducted into the South Atlantic Conference Hall of Fame as a Distinguished Alumnus (Newberry College).

On a personal note, Secretary Hammond and his wife Ginny have three children. The Hammonds are members of Westminster Presbyterian Church in Spartanburg.